In the old days, long before digital platforms were available, music was physically distributed on vinyl, on cassettes, and then eventually on compact discs.  When internet commerce was still young, Tony Parker (i.e., the first and original Tony Parker and not the basketball player) was among the first of a small group of independent artists who started to sell CDs over the web via a tiny internet startup company called "CDBaby." At that time, very few people were downloading music in digital formats, and even fewer knew what mp3's were. CDs were preferred back then, and most people were still buying them in brick-and-mortar stores. These days, the physical distribution of CDs is rare, and CDBaby has transformed itself into a background service that facilitates the digital distribution of music to modern internet retail giants.  The titles on this page preceded the modern digital download era, and for various reasons, they were never added to the Starlite MacPark digital distribution catalog. Each project served its own unique purpose and is now one of the Legacy Recordings. 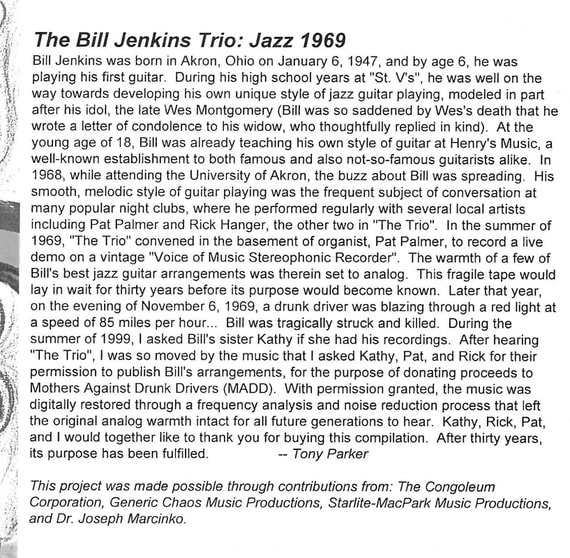 ​​JAZZ CD TO BENEFIT MOTHERS AGAINST DRUNK DRIVING (MADD)
"The Bill Jenkins Trio" is a collection of jazz guitar arrangements, recorded and performed by the late Mr. Bill Jenkins, and released to the public in October 2000 (SM0001) by the independent label, Starlite MacPark (ASCAP) of Newtown, PA.  The CD was available for retail distribution in the Philadelphia, PA and in the Akron, Ohio regions; and it was also available on CDBaby. Proceeds from CD sales supported Mothers Against Drunk Driving (MADD); an organization dedicated to the prevention of drunk driving, to the support of crime victims, and to the prevention of underage drinking.
The recording was made in Akron, OH during the summer of 1969, only a few months before Mr. Jenkins was tragically killed in a car accident. After thirty years, the re-discovered original was digitally restored and remastered by Tony Parker and by Dave Mariasy of Audiomatrix Studios in Toledo, OH.
The CD features Bill Jenkins on guitar, whose style has been frequently compared to that of the late guitar-great, Wes Montgomery, together with surviving "Trio" members Pat Palmer on keyboards, and Rick Hanger on drums. The final track features "Bill's Song," an original guitar instrumental which was composed and performed by Tony Parker in honor of Bill's memory. The cover art, by Angela (Parker) Kaiser and Nick Parker, still conveys the colorful atmosphere of the 1960's, and portrays the image of urban jazz performed in that era.
The CD was made available at several locations in the Akron area including Border's Books, Digital Daze, Ross Music, and Henry's Music; and in the Philadelphia area at select locations including Barnes & Noble at Oxford Valley, and the Newtown Book & Record Exchange. Importantly, legacy copies are still available for listening purposes at the Akron Public Library in Akron, Ohio. 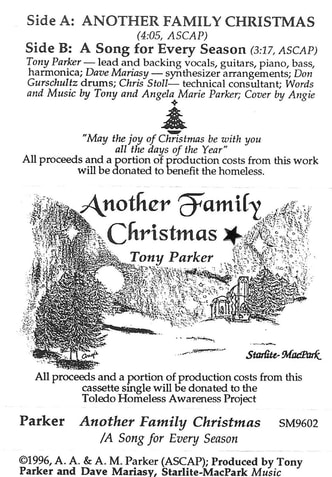 Back in 1996 and 1997, several of Tony Parker's early recordings received considerable local radio airplay in Toledo, Ohio. Some of the songs were from the album A Song for Every Season, including the title song, and a separate instrumental track, I Set Her Free (Prelude). Other songs included an original Christmas song penned by Tony and his daughter Angela entitled Another Family Christmas, and separately, a version of Deck the Halls arranged by Tony and performed by Tony & Friends (i.e., Tony with several of his fellow choir members from Christ the King Church in Toledo, Ohio). This original arrangement of Deck the Halls was also performed live with daughter Angela on several local radio stations, including the Denny Schaffer Show (WRQN FM radio) during the 1997 Christmas season.  All of this was done in support of a local organization called The Toledo Homeless Awareness Project (HAP). The purpose of HAP was to provide shelter and to increase public awareness of the homelessness problem in the local Toledo area.
The first HAP music project was a simple cassette tape (SM9602) released by Starlite MacPark (ASCAP) and produced by Tony Parker and David Mariasy of Audiomatrix Recording Studios. The cassette was released in November 1996 at a price of $3.00 (with all proceeds going to HAP), and it featured Another Family Christmas and A Song for Every Season on side-B.  Note that in 1996, cassette tapes were still as popular as CD's. The first HAP music project became an unequivocal success, leading to a second, more ambitious project entitled Christmas Toledo. 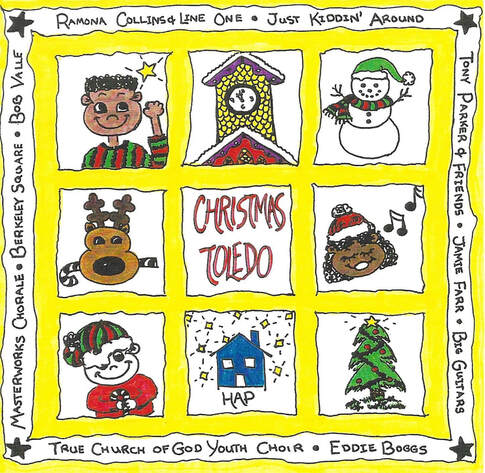 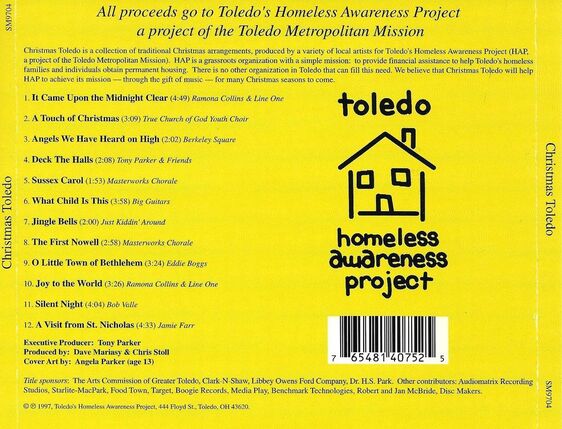 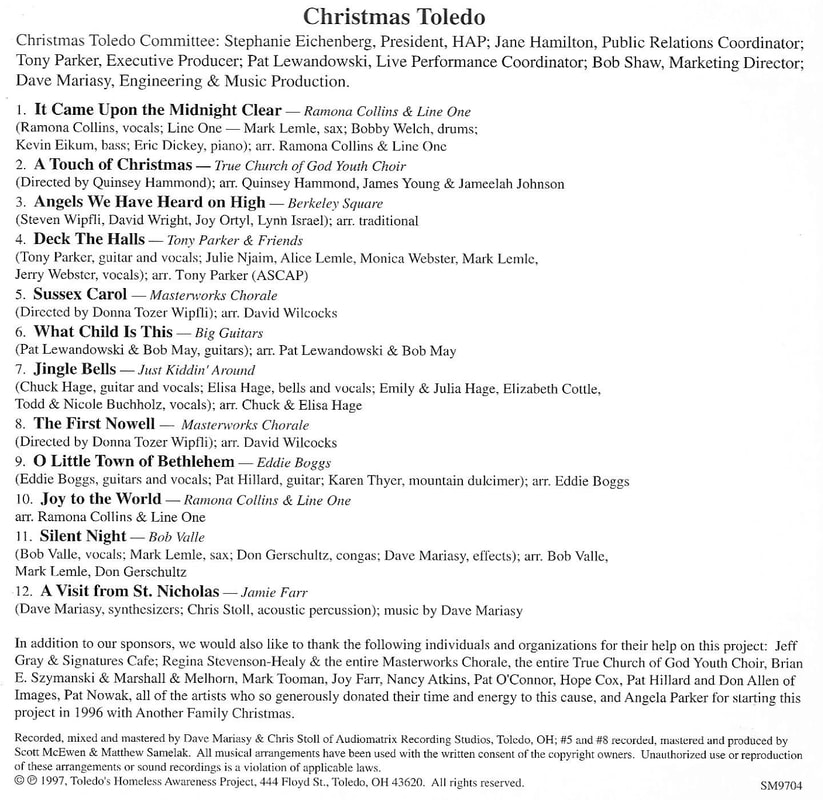 After nearly a year in production, Christmas Toledo, a compilation of Christmas songs featuring local artists, was released by Starlite MacPark (ASCAP) on compact disc in early November 1997 (SM9704). The CD included a guest appearance from one of Toledo's favorite celebrities, Jamie Farr (from the TV series MASH).  A groundswell of individuals and organizations were involved in the production and marketing of Christmas Toledo, and the project grew to take on a life of its own, resulting in a fund-raising effort that had exceeded all expectations of success. With the gross sales going to the Toledo Homeless Awareness Project (HAP), Christmas Toledo, produced by Tony Parker with his good friend, the late David Mariasy, became a legacy to be proud of - for all of those who were involved.    ​

My Titanium Six was a compilation of the first recordings ever made with titanium acoustic guitar strings. In fact, Starlite MacPark, an original Tony Parker instrumental piece, was the very first song ever recorded with a complete prototype set of titanium strings. Starlite MacPark was later released on the Tony Parker album, where it remains available for digital purchase. Through the course of refining the titanium string invention, Tony recorded several additional original songs featured on this album, including works made in collaboration with co-writers Pete Mackey and Patrick Powers.
The album was released in 2001 (SM0107) under the Starlite MacPark (ASCAP) label.
CREDITS: Cover Art by Nick Parker and produced by Tony Parker (compositions, arrangements, recording, engineering, production, acoustic guitars, harmonica, piano, keyboards, bass, and vocals). ©2001, Starlite MacPark (ASCAP), Newtown, PA; © 1999, 2000, Anthony A. Parker (ASCAP); ©1999, 2000, A. A. Parker & P. F. Mackey; ©1999, 2000, A. A. Parker & P. Powers; All Rights Reserved. Note that in 2002, Titanium Acoustic Guitar Strings was a trademark of Rohrbacher Technologies LLC, Bordentown, NJ.

Seven Over Four was a collection of original instrumental music - written, recorded, and performed by Tony Parker on piano and guitar, and released by Starlite MacPark (ASCAP) in 2001 (SM9905). The title song of the CD is a solo piano composition characterized by various time signature changes, including an interlude in 7/4 (hence the origin of the Seven Over Four title). Other songs included Starlite MacPark the first song ever recorded with titanium guitar strings (also released on the My Titanium Six album and on the Tony Parker album); Bill's Song, a classical-style guitar composition that was previously released on the Jazz 1969 album; Prelude, a moody, piano/sax solo that was previously released on the album, A Song for Every Season; Crossroads, a solo piano piece performed to the backdrop of ocean waves in Lubec, Maine; and several other previously unreleased compositions that were performed with piano, keyboards, and guitar.​
Credits: Cover art by Angela (Parker) Kaiser; Tony Parker: compositions, arrangements, recordings, engineering, production, piano, acoustic guitars, keyboards, and bass. Track #8 was digitally recorded and mastered at Audiomatrix Recording Studios in Toledo, Ohio, and included Mark Lemle on sax and Dave Mariasy on keyboards. Ocean sounds were recorded near the W. Quoddy lighthouse in Lubec, Maine. © 2001, Starlite MacPark (ASCAP); ©1997, 1999, 2001, Anthony A. Parker (ASCAP). All Rights Reserved.

Mary Ann & Dance to the Beat

The single Mary Ann with Dance to Beat on the flip side was released as a 45-rpm vinyl record in 1983.  Mary Ann was re-released in 1997 as a track on the album A Song for Every Season.  These two recordings featured Tony's long-time friends, Thomas Janini on bass, and the late David Fulmer on drums. Dave was as good a drummer as any drummer you will ever hear.